Original text (some language mistakes corrected here 2019) written for the cd SOUNDS -99 on Blue Tower Records, recordings from the festival with the same name, organized by FRIM.

At the rehearsals with FRIM Big Band, Sten Sandell tells us musicians: “It is music that we are going to make”. Dror Feiler says about our role in his piece: “Don’t try to make music!” Even in dynamics they are opposites. Both trust, however, each in his own way, the musicians to have high concentration and sensibility.

Free improvisation has it in common with the “serious” tradition to favor a reflecting but detached, respectful listening from the audience - as well as among the musicians. It’s supposed to have it in common with the “oral” tradition (folk, pop) that it is the playing situation which is the point of departure for the act of the improvisor. In reality, improvisors choose quite different approaches. More than you think, the musicians - in a natural way - reflect the attitudes of their audiences. In the Stockholm improv circles, the meeting around the sounds is given priority, and the musicians communicate over the years through playing for each other and for the enthusiasts. 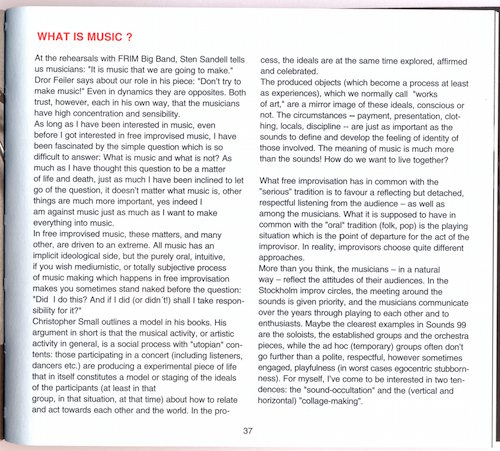 Maybe the clearest examples in Sounds -99 are the soloists, the established groups and the orchestra pieces, while the ad hoc (temporary) groups often don’t go farther than a polite, respectful, however sometimes engaged, playfulness (in worse cases egocentric stubbornness).

For myself, I’ve come to be interested in two tendencies: the “sound-occultation” and the (“vertical” and “horizontal”) collage-making.

The playfully democratic, “chamber musical” style I can still appreciate, but I am less interested in it. Nevertheless, it has fine representatives in Low Dynamic Orchestra, Gush in certain moments, and Sandell’s Big Band piece.

The occulting style is using a limited sound field during a relatively long time to reach a kind of bewitchment, a transformation of the sound mass over image to body. I can’t help quoting the book Music by Sufi Inayat Khan:

By the power of sound they have created beings; in other words by the power of sound they gave a body to a soul, to a spirit, making it into a kind of being which is not yet a physical being but of a being of a higher kind. They called such beings Muwakkals; and they worked through these beings, using them in any direction of life for a certain purpose.

This musical magic is at the same time physical and spiritual, but the real power lies in the awakened being situated in the power of our own imagination, we are ourselves responsible even if we might not want or be able to foresee what the figments of our brains can invent.

Some of those I think might stand for this occultation is Dror Feiler in solo and big band, Lindström/Runolf, Too Much Too Soon Orchestra, Mats Gustafsson’s snuffling solos and the Sons of God (not part of this festival).

With collage I mean, in improvised music, the passionate activity to impulsively and often apparently randomly bringing together contrasting elements. [The “simultaneity” with Cage and Stockhausen which is planned (through chance or combinatory operations) is paradoxical or self-contradictory for me. By principle without any apparent engagement, it tends towards an authoritarian or irresponsible attitude: it might expand the formal possibilities but the musician becomes a slave under these if it doesn’t come from passion.] The potentials of the collage come from its possibilities to a more open world view to welcome surprising encounters, new analogical circumstances and unconventional forms of non-recognizable patterns. Humor and the absurd are not only related to tolerance but also a loving and poetical, not to say anti-racist, anti-nationalist, attitude.

In this tradition I find e.g. Rockout, Tomas Halling (not participating in this festival) and in some ways Mikael Stavöstrand.

The Belgian surrealist Paul Nougé had a speech in 1928 later published under the title Music Is Dangerous. Besides being both funny and apt, it is one of the most penetrating texts about music I’ve read, and he gets to sum up some of my points:

We are not long in realizing that actually we are not judging something, but taking part in something. [...] Hence, whether we deal with music or some other human event, spirit is at our mercy and we are, in reality, accountable for it.

And this is my definition:

Music is a ritual, mainly analogical interaction between human structures and sound structures.

So to the next question: What is man?