an audio perfume for self-defense

Commercial radio with “old favorites” (the assumed majority taste) fills the brain with poison as soon as you go outdoors, in cafés, shops and buses in order to block free thought. Long after the music has become silent, it bounces in the head through the nagging and the tyranny of involuntary recognition.

Manifesto of a Surrealist Group 2008

In an episode of the children's program Sesame Street, which I saw on tv as a child, Ernie and Bert have a noise war. One is making noise with pots, the other becomes irritated and turns on the electric whip, then the dish washer, the washing machine and the vacuum cleaner are turned on one by one, to outnoise the earlier noise. In the end, the fuse is gone, and they can both enjoy the wonderful silence. [When I found this clip on youtube here to the right, I seem to have exaggerated the story in my memory, or I saw a different version.]

The possible unconscious impression of this episode on me I didn't realize until this sound piece was done. Maybe it was the same influence to give the us military the idea for the sound torture of the prisoners at Guantánamo that was recently revealed. The use of the signature melody for Sesame Street, on loud volume, hours in a row, also gives an indication ... Recently, the sound as a weapon (called LRAD), has also been introduced in riot fight during big summits in the usa. (See clip to the left.)

In daily life, though, the tyranny of sound consists for the most part of “friendly” attacks. Commercially, and thus socially, motivated background music is piped out so much, leaving no space for critical or any form of clear thinking. Surrounded by this disturbing sound sparkling, the public space, where we want to be and move freely, becomes a prison by the mental associations that destroy free thought. Noone asks us for permission to play their supposedly “popular” music, i.e. recognized by the majority. Many surveys have nevertheless showed that more people are tormentedly submitting to the publicly piped music than there are who positively like it. They keep silent, thinking most other people want it! Commercialism is homogeneity, in spite of the claims of libertarian ideologues, since it's the easily-washable brains of the most profitable majority that will reproduce the popular, a tautology for stupefying the masses.

To be disturbed and tormented by noise is not new for our time. Schopenhauer is getting really excited and says that the hate against noise is connected to intelligence. 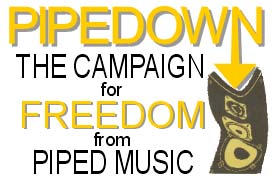 You really want to start a campain like “The Rectifier”, who smashes cars with alarm in the film Noise from 2007. There is organized resistance in reality, though, e.g. the International Campaign for Freedom from Piped Music, or the campaign “Befria samtalet” (liberate conversation) that was started by Hörselskadades Riksförbund (the association for hearing-impaired), “against bad sound environment, for a conversation-friendly Sweden”.

We're not in such a small minority as we often think. We should make a habit of protesting and simply tell the responsible ones to stop the noise, or at least explain if it's absolutely necessary for some particular reason. But we don't always feel like or have the energy to be so direct or bold – and regardlessly, we don't always gain respect for our wishes.

One example. In a swimming-hall not long ago, I protested against them playing background music. The confused swimming guard turned it off, and I swam along in piece for a while. Then it came back without warning. Why? Because some people asked for it. So those who ask about the muzak have the precedence and are regarded as being in majority, in spite of no actual inquiry having been made. It's a coarse misunderstanding of what democracy is. Democracy should take special consideration to a minority that is threatened by assault from the majority (or the percieved majority). It should be enough with a complaint from one person to shut it off, since you can't voluntarily shut off sounds you don't want to hear. At least it should be clearly announced that you will be assaulted on by wallpaper music before paying the entrance.

I felt defenseless against the wall paper music for a long time. In a cabaret by swedish comedians Hasse&Tage, there was someone that was able to shut his ears. In spite of training, I didn't succeed with that, so I've tried with ear plugs. But the problem isn't always that the noise is too loud. Only if you're deaf you can escape the outer noise completely, except for strong bass that can be felt in the entire body. But the inner sound remains, and that's the catch. The problem with piped music is that it's so repetitive that you easily recognize it. After all, it's “the most popular songs”, “the best music right now”, “the greatest hits” that are played and are supposed to make you in a good mood when you can sing along. It's an occupation of the brain by a foreign agency.

Frustrated of not being able to think about anything else, I began to write a hate list with all the worst songs that affected me, with no specific plan in mind about what to do with this list. Sometimes I tried to escape to the only place I know that's supposed to be silent and where you can remain undisturbed, a library. But people there sometimes managed to disturb as much by whispering as by screaming. Their respect was based on formalism, not on understanding. Just like those who go out for a smoke, but then drag in the smell through their clothes.

You can't shut your nose, either. The best smell is to have no smell. If you can't avoid bad smell, as an emergency solution you can try to mask it with another smell, hopefully a better one.

When you're too tired to protest, thus, or when protests have no effect, there's a need for something to reset the brain into a neutral place where thought is liberated to concentrate on what it wants – especially reading and writing has been my major problem, sitting e.g. on a café with piped music. At least there's the need for a defense weapon.

Now there is one, and I provide it for free for the benefit of humanity.

An audio perfume. Would it work?

Somehow, I decided to make a piece based on my hate list, and put all the songs on top of each other until they become a dense noise without any recognizable traits. The idea is that the big overlapping of all these songs would create a layer of frequencies and rhythms that block out more or less the same frequencies and rhythms that there are in the background music in those cafés or shopping malls. It should be a noise that doesn't irritate (as much as the muzak, anyway) but also doesn't attract too much.

Because, to be strict, the biggest problem is actually not how terrible the music is, but how recognizable it is – which makes it colonize the brain: it “sings along” whether you like it or not. “Good” music can actually be just as distracting as “bad”. Studies have shown that, when people drive, they don't risk their safety so much from listening to music or talking on the cell phone, but how much emotionally engaged they become in it, which they do as much from music they like as from music they dislike, and from how upset, positively or negatively, they become from the topics in a phone conversation. It's a bit similar with driving safely as with the possibilities to read and write. When I listen to music I like and try to read, thinking I would have double enjoyment, I can find myself trodding on the same sentence over and over again, without understanding anything, for hours. (Maybe I should also make a version with popular background music that I like – usually not much, by the way.)

Even though this sound, if you wish, could be heard as a noise piece, it's thus created as a defense weapon, an anti-music.

As opposed to other pieces that I have on my web site, all in mp3 format, this is in it's original format an mp3, so that it can be downloaded and played in an mp3 player as soon as you need to be undisturbed by the background music forced upon you.

The only places where this wouldn't work is the waiting music in phone lines, usually fucking Vivaldi, Mozart or Bach, and, the most horrible of all, swimming halls, unless you can afford waterproof headphones and mp3 player. There's also stories about background music in hospitals, where there are lots of defenseless people. This is more than pollution, it's rape!

Production method: since the goal was an mp3 file, the basic materials have also been mp3s downloaded from the internet. It's probabaly safest to not list the source materials, not because of my crime against copyright (how do you regard a downloading that's meant to destroy rather than enjoying the downloaded materials?) but because it's the recollection of the songs in your own brain that destroys the serenity of the mind (in this way it's been a horrorful masochistic struggle to carry through this work), it's enough to say a title or an artist and many days can be destroyed. But for those with a strong stomach, or those who plan an audio torture on me, similar to those of the Guantánamo prisoners, you can watch this page.

Healing and Harming Sounds by Karen Stollznow (from eSkeptic, the email newsletter of the Skeptics Society, December 7th, 2011)

Shh – can you keep it down? Nope. Not unless you want to do away with civilization. Our buzzing, humming, whirling, machine-driven world is a poster child for technological progress, right? As is hearing loss. It’s driven one man to search the world for silence. We’ll hear what he didn’t hear, and what Einstein predicted we should hear in deep space, where gravitational waves may reveal the hidden sounds of the universe, including the birth of black holes.
Guests: Descripción en español
First aired July 5, 2010
This episode was tagged with: physics, decibel, sound, noise, silence, black holes, gravitational waves
Compositions
Contact and upcoming events.
The Welcome page.
Updated the 26th of March, 2012.